Over the past 18 months, my school has been heavily involved in working with the Empathy Lab project, which uses books and reading as a starting point for children to help develop their empathy skills. It's having a noticeable impact on the way that many of our children think and act. This term, as part of our work, the Year 6 children have been focusing on the plight of refugees from different parts of the world.

We started by talking about what the class already knew about refugees, and then spent time reading and sharing a wide variety of books. Some, the pupils were already aware of (eg Boy Overboard by Morris Gleitzman, which we had read as a class story in Year 5), although they were looking at many of them for the first time. The books were added to a Pinterest board, which we updated as they discovered more, and put on the Empathy Lab Book Spotters website. Links to many of the books, along with some planning and resources that I've found are available on this Padlet page. 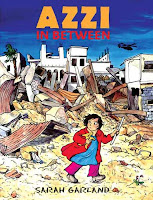 After a couple of weeks of reading and researching, we had a wonderful visit from an Amnesty International speaker, David Huband, who came to talk about human rights. The children discussed which rights they had and which rights they felt that refugee children might be denied. The class spent a lot of time discussing how and why children and their families travel from Syria to the UK. 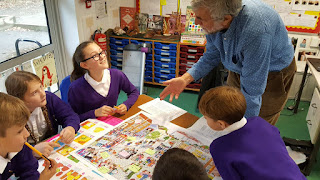 As part of our Empathy Lab ‘social action’ work, the children decided to take part in Amnesty’s ‘Write for Rights’ campaign, and write letters to some of the refugees. They wrote about how people could make refugees feel welcome in the United Kingdom and what they enjoyed about living here. Because they were writing for a real audience, and could see that there was a genuine purpose behind their work, they were highly motivated to write and produced some fantastic work. 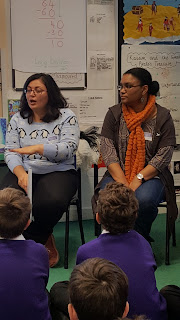 We also had a visit from a local refugee charity, GYROS, who shared the work they were doing in the Great Yarmouth area. One of the speakers was a refugee from Armenia and the other was a refugee from Mozambique, so they both had amazing stories to tell about their lives. The children were inspired by what they had been told and wanted to know how they could help. After Christmas, they've planned some fundraising acitivities but, equally importantly, they're going to do some work to raise awareness of the refugee situation in the local community. 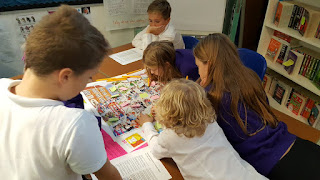 Thoughts from Year 6
Troy: I actually feel as if I’d rather be the refugee than them so they didn’t have to suffer through things. I feel awful about what has happened.

Gracie: I tried really hard to empathise with them, but even with a vivid imagination like I have, it’s very hard to understand how bad things are.

Romy: When we read all the books about refugees, it made me think a lot about it. When someone says the word refugee it brings up loads of emotions as I didn’t know what they were going through before. Reading all the books helped me understand it.

Lauren: When you hear the stories about how hard it is, it makes you feel really lucky. I don’t like being separated from people I love for even a day, so just think what it would be like forever. 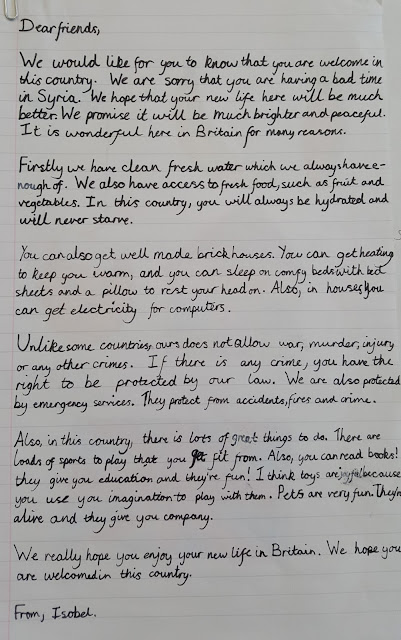 Romy: I feel upset for the refugees but I’m also angry at the people who are putting them through it. They’re just trying to have a normal life but they’re getting destroyed for no reason at all. Some of them are just little babies.

James: Writing the letters made me realise how many simple things I can do without being scared. I could just get a drink out of the fridge if I wanted to.

Lauren: It must be awful to go on a boat ride and not know what’s at the end of it. I know what’s going to happen every day and that makes me feel safe, but they don’t even know if they will survive to the next day.

Romy: When I wrote the letters, I felt lucky. I’m lucky anyway but I just felt lucky that I had the chance to make someone’s day a bit better. I know that when they get the letters they’ll realise that at least someone is thinking about them. 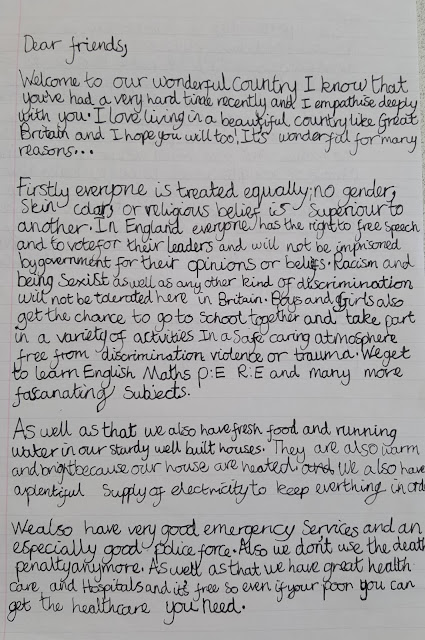 Gracie: Learning about refugees made me think about books like Once by Morris Gleitzman. The boy in that was a refugee too. All of those books made me understand what it must have been like to be hated in the war.

James: It made me ask my mum if we could send them stuff to help. We have lots of stuff that we don’t really need.

Troy: Some people in Yarmouth should treat the refugees kindly because, at the end of the day, we’re all humans.

James: I can’t imagine leaving everything at home. I’d have to leave my family, my pets, my books and my friends. I’d miss the village we live in. All my memories would be left behind. How could they take their memories with them? They must also miss speaking the language they know. They would just ‘feel’ their own language and to have to speak in another language all the time, well, that’s just like when I went to Holland.

Troy: It was probably some of my favourite work that we’ve ever done. We’re learning about the real world and we’re all part of it. Like, everyone, not just us and the people we know. 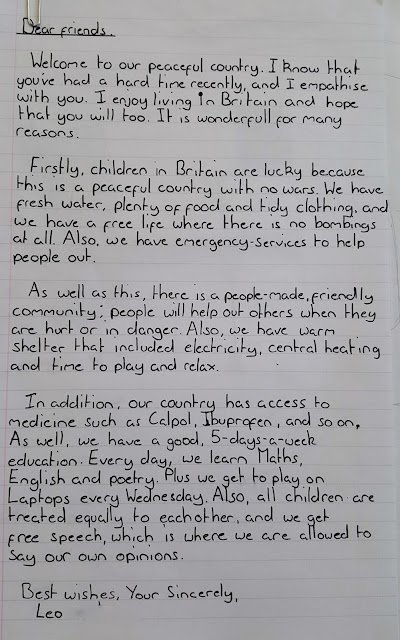