I was delighted to be asked to take part in the blog tour for the release of the new book by Penny Chrimes, The Dragon and Her Boy. It was a pleasure to interview Penny and ask her about the book, as well as about her future writing plans. 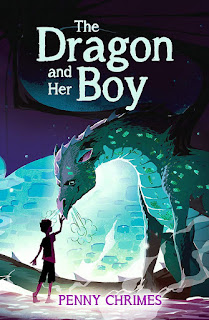 How would you describe The Dragon and Her Boy to someone who hasn’t yet read it?

The Dragon and Her Boy is a magical historical adventure about Stick who works as a tumbler - or a street acrobat - with his friends Spud and Sparrow. They are entertaining the crowds at a fair one very hot day in August when the earth gives a mighty heave; by the time the dust settles, Spud and Sparrow have disappeared.

Stick spots a narrow crack in the ground and summons up all his courage to go down in search of his fellow tumblers; instead, he falls into the lair of an ancient, very touchy dragon.

At first it takes all Stick’s wits to avoid the dragon eating him, but soon he realises that she is fleeing the same evil figure that haunts his own nightmares - and who is now stalking the streets of London.

Stick vows to save the dragon, with the help of his fellow gutterlings. But it means facing up to the secrets of his own dark past.

The ‘time-slip’ 19th century London setting feels essential to the book. Why did you choose to set it during this period, and what do you think it brings to the story?

I have always loved the rumbustious anarchy of the Georgians as well as the energy and drive of the Victorians, so I’m afraid I have prigged bits from both periods and invented a king to go with it - King Billy who sleeps in his feather bed at Buckanory Palace and holds his hankersniff to his face when he drives past his hungry subjects in his gold carriage.

I have lived in South London for many years and I love wandering the streets - especially the City where you can still take a detour down a narrow alley-way and find yourself two centuries back in time. I can feel stories sneaking up on me from the shadows.

The real-life street-kids, or gutterlings, would have led miserable lives - and I never forget that in the books - but without parents to tell them to get to bed on time or to come in for their tea, it frees them up to have larks and adventures. They have to live on their wits, and that gives the books the spice of danger.

It also allows me to give my gutterlings a distinctive language of their own - I have a huge book of historical slang on my desk, as well as a wonderful book called Ware’s Dictionary of Slang and Phrase; the slang of that period is so vivid and funny, and it helps me to hear my characters talking.

At its heart, the book is about Stick, the main character, and his evolving relationship with the dragon. What do you think your readers might take away from this aspect of the book?

There are many things about that relationship - it is a complex one.

Very sensibly Stick is initially just worried about whether the dragon is going to eat him. It is not until quite far into the book that he begins to trust her. Dragons, after all, are notoriously cunning - and greedy.

And as for the dragon, she can’t get her head around the fact that Stick is being kind to her; ‘It is most irregular, all this helping one another…’ She’s more accustomed to knights trying to kill her and her kind.

So I suppose it’s partly about taking the time to find out why people (or dragons) behave in a certain way. As Stick gets to know her he begins to understand her fears, her vulnerability, and the loneliness of being the last of her kind.

Meeting the dragon - and facing his fears - turns Stick into a hero. 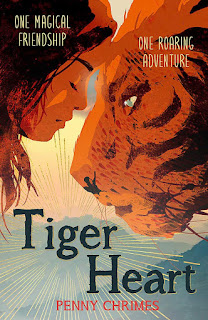 Being published soon after 2020’s Tiger Heart, The Dragon and Her Boy is your second book about the gutterlings, a group of young children who live on the streets of London. Although each story is fully self-contained and features a different character as the main protagonist, it feels as if there could be more stories to be written. What are your future writing plans and do they include further adventures of the gutterlings?

There is already a third one written - watch this space! - but I can’t say too much about that one at the moment I’m afraid!

As I wrote Tiger Heart and The Dragon and Her Boy the characters of the children in the gang - Fly and Stick, Tree and Cess, Squinty and Bandy - took on lives of their own, and I am always fizzing with ideas about their future adventures by the time I finish each book.

I have also been writing a book for older readers over the last few months - a kind of Regency romp crossed with Gothic mystery - which has been such fun!

I suspect that you’ve been able to do a fair bit of reading over the past year or so. Are there any children’s authors or books that you believe have had a significant influence on your writing style?

Oh the list is endless! Like so many authors, I was a passionate reader as a child, and I often re-read those books still. Joan Aiken was probably my all-time favourite - The Wolves of Willoughby Chase, Black Hearts in Battersea. Lots of historical authors like Leon Garfield, who is less well known now, but whose stories and use of language still send shivers down my spine.

But I have loved reading amazing authors like Frances Hardinge, Kiran Millwood Hargrave, Struan Murray, Katherine Rundell. I always try to catch up with new books when I’m between books of my own, and in the last few weeks I have really enjoyed The Valley of Lost Secrets, The Voyage of the Sparrowhawk, When Life Gives You Mangoes, Darwin’s Dragons … I’m half way through The Girl Who Speaks Bear, and The Last Bear is next on my list.

So many great books - so little time! 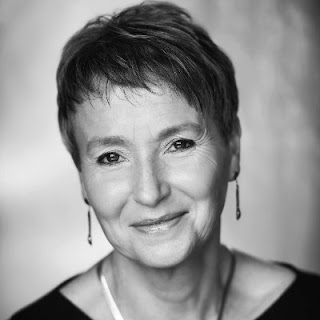 Review of The Dragon and Her Boy

Having read and thoroughly enjoyed Tiger Heart, last year's Branford Boase Award nominated debut from Penny, I was absolutely thrilled to be sent a preview copy of The Dragon and Her Boy, which is set in the same world and features many recurring characters.

The story is set in and around 19th century London, although there's only a vague resemblance to the London that features in the history books. Stick, the main protagonist of the story, finds himself under the city streets, alongside a tired and increasingly frustrated dragon who's been trapped for several days. His options are limited, basically he either frees the dragon or ends up as her lunch. Although the two characters initially circle each other warily, they soon realise that, without trust, neither of them will escape their perilous situation.

Most of my favourite children's books focus on the importance of relationships (Varjak Paw and Edward Tulane, for example), which is one of the reasons that I found The Dragon and her Boy to be such a delightful read. Stick has to navigate his way through a wide range of relationships, including those with his fellow gutterlings (a group of children trying to survive on the harsh London streets), the villainous Sir Jasper and, most importantly, the dragon. Because he's such a kind-hearted and caring child, who shows enormous loyalty to the other gutterlings, Stick is very easy to empathise with and care about. An unexpected tragedy halfway through the book really reinforces how alone Stick and his friends are, and how every day is a literal fight for survival. The Dragon and Her Boy is a first-class adventure story that fully deserves its place in any Year 5/6 classroom library.