The False Rose by Jakob Wegelius (translated by Peter Graves)

The Stone Roses released their debut album in 1989. When it first came out, I rushed to my local branch of Andy's Records to purchase a copy on cassette and, for at least three weeks, simply refused to play side two. In my opinion, there was absolutely no way that it could as mind-blowingly good as side one. It just couldn't. When I eventually did get round to listening to it, I very quickly realised that side two was equally as good, perhaps even better.

I should really have learned my lesson after that but, earlier this year, I made a very similar mistake. The Murderer's Ape by Jakob Wegelius is undoubtedly one of my top five children's books of the past few years and, a couple of months ago, I was fortunate enough to be send an advance copy of its sequel, The False Rose. It waited patiently on my pile of unread books for weeks as I was genuinely concerned that it wouldn't be a worthy follow-up. However, again, I couldn't have been more wrong. It's another absolute masterpiece.

The story itself is complex and spans many different times and locations. Without going into detail, it stars Sally Jones, a seafaring gorilla, who travels to Glasgow in order to learn more about a mysterious necklace which has recently been discovered on her boat. In a similar fashion to The Murderer's Ape, the plot unravels at a perfect pace, with increasingly dastardly characters and villainous schemes introduced regularly throughout its pages.

However, as with the first book, the real triumph is the characters and the relationships which exist between them. The cast is large but each character is so richly drawn and wonderfully constructed that there's absolutely no chance of the reader becoming confused. Subtle shifts in the dynamics between them are beautifully written, with real significance given to the different motivations of the villains. Sally's steadfast and unwavering loyalty to the Henry Koskela, Signor Fidardo and Ana Molina, the other returning characters from the first book, again shines through, as does her compassion towards Bernie, a hired thug with increasing reservations about the situation that he's found himself embroiled in. I can think of very few books where the characters feel as alive as this and I'm confident that you'll end up caring deeply about what happens to them all.

Although Jakob Wegelius is the genius behind The False Rose, being both author and illustrator, a special mention must go to Peter Graves, who's done an incredible job translating the book from its original Swedish.

The False Rose is truly special. Read it soon, read The Murderer's Ape too if you haven't already, and fall in love with the characters who inhabit the unique world of Sally Jones.

A huge thank you to Pushkin Press for inviting me to be part of this blog tour. 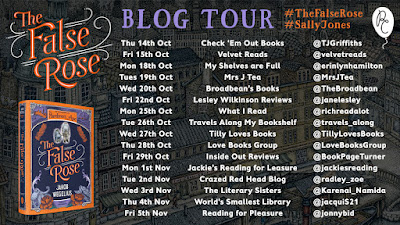