Poetry has been the poor relation in the teaching of English at primary schools for as long as I can remember. In the staffroom, you might occasionally overhear the Year 4 team quickly discussing whether it's time for the infamous annual 'poetry unit', or Year 6 teachers swapping 'fantastic poetry comprehension worksheets with loads of inference questions that'll definitely help the kids with their SATs', but that's not really teaching poetry as far as I'm concerned. For children to genuinely have an appreciation of it, it needs to be a regular, high-profile part of the classroom routine, not just a bolted-on extra. 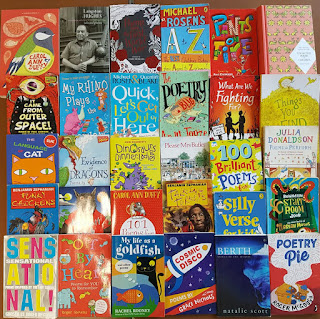 Over the past few years, we've tried to nurture a love of reading, writing and performing poetry across the school and make poetry a more integral part of the school day. Below are some of the ideas that we've introduced over recent months.

Three minute poem
At the start of every half-term, the children all write down some potential poem titles (eg Lonely Giraffes, The Cinema Trip, Beyond The Sky) on to slips of paper. We collect them in and then, two or three times a week, one of the titles is randomly selected and shared. The children (and staff!) have three minutes to write a poem based upon the title given. The only rule is that nobody can stop writing until the three minutes are up. It was a real challenge at first (I can't think of anything, It's too hard, I've got an earache, etc), but they soon realised it was a fun way of writing without rules and that it allowed their imaginations take off in strange directions. We always make sure that we read a few at the end of each session.

Poem of the Day
I've written about this before (here), so won't go into too much detail, but basically the children sign up at the beginning of each week to perform a favourite poem to the rest of the class. 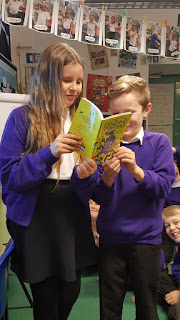 Practising for Poem of the Day

Blackout Poetry
We attempted this for the first time last week. It's a good way to squeeze a final bit of use out of any books which would otherwise be destined for the recycling bin, although if you're lucky enough not to have any books in such bad condition, photocopies work just as well. Everyone is given page or two from a book to work with. First, they read through the page to get an overall view of the text and then select two or three words that they want to appear in their poem. The children then read the text again and start to black-out surplus words with a marker pen. They found this difficult to start with, until they realised that they weren't trying to create 'lines' of poetry, but just groups of words that looked and sounded good together. A lot of them started by removing only one or two words from each line. However, they soon noticed that the more ruthless they were, the more the poem would have an identity of its own, rather than simply being a shorter version of the page they started with. One of the children ultimately ended up with a poem of nine words from a full page of text, which sounded great when read aloud. 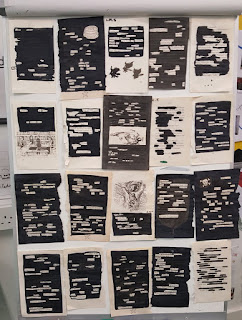 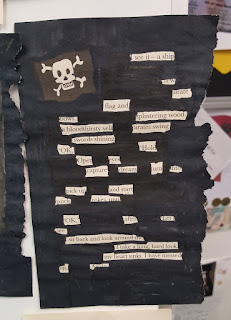 Writing N+7 poetry is perhaps one of the most well known examples of applying an Oulipo (constrained writing) technique and is certainly the one that's been most enjoyed by my class. The children started off with a poem (they actually used their favourite song lyrics the first time we attempted it) and went through it highlighting the nouns. Once they'd finished, they then found each word in a dictionary and replaced it with the noun that appeared seven nouns after it. It's great fun and completely removes the 'I don't know what to write' option. When we'd tried it a few times, the class were all full of ideas about how to adapt it, including changing the number, replacing verbs and adjectives, using antonyms and simply swapping nouns around.

Nursery Rhyme mash-up
Even with a Year 6 post-SATs class, this activity went down a storm. The children were given copies of about a dozen nursery rhymes and then simply had to create their own, either by mixing up the lines from one nursery rhyme or by selecting and adapting lines from different nursery rhymes. It's quick and can produce some amusing and imaginative combinations. Nursery rhymes also work very well with activities such as N+7.

Humpty Dumpty went up the hill
To fetch a plum pie
Along came a spider
And bumped his head
Then down came a blackbird
And went wee, wee, wee all the way home 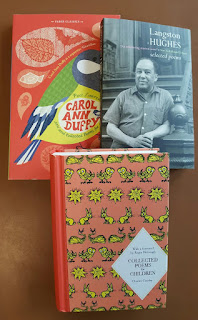 Some of our recent purchases

The Room of Stars
This fun game came directly from Jumpstart! Poetry by Pie Corbett. It's an easy way to produce a whole class poem and can be hilarious. Half of the class need to write down five places (castle, river, shed, village, desert) and the other half of the class need to write down five nouns (we started with concrete nouns but they much preferred using abstract nouns). We then selected one child from each half of the class to choose one of their words to pair and create a line of the poem (eg the room of stars, the mountains of desperation, the cafe of misery). Most of the lines worked really well, some were a little dubious (the toilet of stress) and some were very quickly discarded (the bedroom of ecstasy!). We then put the lines together to create the poem. 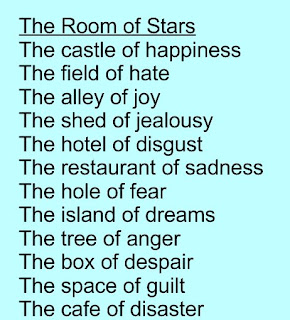 We're going to spend a lot more time on poetry over the next few weeks, and will be sharing some of our work with other classes and with parents. If you've got a fantastic idea to share, or have tried anything in your class that's been a huge success, please let me know. Equally, if you've tried anything that's been a massive flop, let me know that too, so that we can avoid it.

Below are some the books which have provided the ideas above. I'd also recommend that you visit the blogs of Michael Rosen and Brian Moses, as they're both absolutely full of great ideas for developing a love of poetry.

Useful books
Jumpstart! Poetry, Pie Corbett
What Is Poetry?, Michael Rosen
Rose, Where Did You Get That Red?, Kenneth Koch
Poems To Perform, Julia Donaldson
Published in September 2017: How To Write Poems, Joseph Coelho