How To Be Brave - Daisy May Johnson

Pushkin Children's Books are one of the most original children’s publishers around and have released some stunningly good reads over the past few years. When I was invited to take part in the blog tour for How To Be Brave by Daisy May Johnson, I jumped at the opportunity. 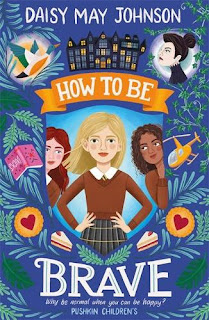 Much of the story takes place in a boarding school, The School of the Good Sisters, which is run by a group of nuns with a very novel approach to teaching the curriculum. The opening few chapters explore the relationship between Elizabeth North, an orphan, and her childhood nemesis, Magda DeWitt. Without revealing too much of the plot, many of their problems are caused by the rescue of a small brown Amazonian duck.

The book then jumps forward a couple of decades, to a time when Elizabeth is single-handedly raising her young daughter, Calla. They live in considerable financial hardship, with Calla continually attempting to ground her mother, by now a world-renowned duck expert, in reality. When Elizabeth has a chance to travel to South America for a unique work opportunity, Calla is forced to attend The School of the Good Sisters. Changes in leadership at the school have turned it into a very different place, although Calla survives the hostile environment by forming close friendships with her two roommates, Edie and Hanna. After a few weeks, Calla loses contact with her mother and learns that she is missing somewhere in the Amazon. She then has to team up with her two best friends to try and work out exactly what is going on.

There is so much to love about this book. It's fun and energetic, being a wonderfully quirky updating of a traditional boarding school story, and it has a rich collection of characters. A personal favourite of mine is Gareth, a security guard who has an obsession with trying to improve the quality of his vol-au-vents. There are references to contemporary children’s literature (Robin Stevens and Eva Ibbotson both get a mention) which help give the book a modern feel. A chapter with strong similarities to the famous scene from the film Spartacus is genuinely funny, as well as delivering an important message about the importance of loyalty. The book is absolutely crammed full with amusing footnotes, which really help the reader develop a sense of empathy with the story's narrator.

How To Be Brave touches on several important themes, including loneliness, friendship and poverty. The most powerful message for me is the way Calla learns that her mother, despite loving her daughter dearly, is not infallible, and often struggles to cope with the challenges of day-to-day life. It’s a universal message that we all ultimately learn, but it’s done with subtlety and with love.

I can see it being very popular with fans of the Murder Most Unladylike and Scarlet and Ivy series, and would be a perfect addition to a Year 5/6 class bookshelf. I thoroughly enjoyed it and look forward to reading more from Daisy May Johnson.

How To Be Brave was released on the 1st July and is available now from all good independent bookshops. Huge thanks to Pushkin for inviting me to take part in the blog tour.