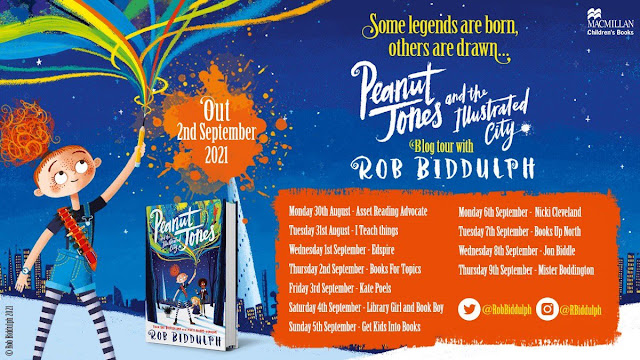 Rob Biddulph has illustrated some of my favourite books of the past few years, as well designing the front covers for several more. With the release of Peanut Jones and the Illustrated City, an energetic, original and highly-imaginative adventure, he's also now written one of my favourite books of the past few years.
Peanut Jones is finding it hard to adapt to all the changes that have taken place in her life. Her dad's gone missing, with no obvious clues as to his whereabouts, and she's struggling to fit in at her new school. Things take a turn for the bizarre when she finds an art pencil with mysterious powers. Suddenly, she discovers that whatever she draws on paper immediately becomes real and Peanut, along with Little Bit, her five-year-old genius of a sister, and Rockwell, her school Study Buddy (but most definitely not her friend!) gets transported to the magical world of Chroma. Also known as The City of Colour and Creativity, Chroma is made up of several different districts which include Warholia, Cubeside, Vincent Fields and Modernia. Although trying to avoid capture by the mysterious Mr White and returning home safely are Peanut's main priorities, finally finding out what actually happened to her missing father is also becoming an increasingly real possibility.

There's just so much that I love about this book. The illustrations, as you'd expect from Rob, are absolutely fantastic and the limited colour pallette, which is basically black, white and orange, works beautifully. However, my favourite thing of all is the wonderful collection of characters who appear throughout the story. Readers will be able to empathise with the central trio of Peanut, Little Bit and Rockwell, but the cameos from joyful creations such as Jonathan Higginbottom, the talking alligator with ambitions to become a nursery nurse, and Table Guy, the superhero with total command over items of furniture and who finishes every sentence with an exclamation mark, are absolutely hilarious. At almost 400 pages, it's certainly a hefty book but with short chapters and so much wonderful artwork, it's one that readers will absolutely fly through. Although the story is complete in itself, it's also sets everything up beautifully for the second part of the trilogy which is due sometime next year. I personally can't wait. 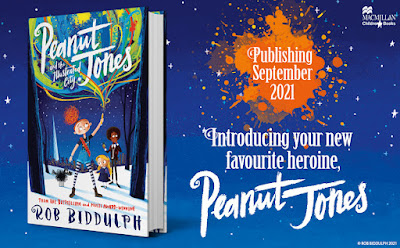 Not only is Rob a wonderful illustrator and author, and the World Record holder for organising the biggest ever live draw-along, he's also an extremely considerate person who was kind enough to record short personal videos for each stop on the blog tour for his book. Thank you Rob, and thank you Macmillan Children's Books for inviting me to take part.
Posted by Jon Biddle at 07:43